When we think of leadership development, we often picture either one or a team of facilitators teaching various theories to executives and other organizational leaders. They divide their content up into categories like human resources, finance, and strategy, then present the information in a structured and pre-determined manner. While most people find that the professor was good and that the content was well researched, we have good reason to be skeptical that this is the right way of going about helping leaders rise to the monumental tasks before them.

At the Systemic Leadership Summit, I spoke to Dr. Morne Mostert, one of today’s leading systemic teaching experts, and he clued me in on a little-known fact. “a PWC study in 2006, with fifteen thousand organizations, found that in more than eighty four percent of those respondents,” he explained, “the return on investment from leadership development was zero percent, negligible.” This conventional way of going about leadership development obviously wasn’t working, so we set out to find a better way. But first we needed to figure out: what exactly was the problem?

A large part of the problem was that the theories set out by these experts weren’t actually rooted in the experience of the executives. Sure, they may have studied actual cases, but they almost surely didn’t study the specific problems of that specific leader that they’re trying to teach. Instead of working from the experience and trying to figure out how to approach it, we’ve been trying to fit our experience into our theories. The issue with this is that these problems simply cannot be broken down into the neat compartments of theories. The “wicked” problems that leaders face aren’t just finance, strategy, or human resource problems, but rather often involve a complex interplay of a wide variety of factors. Dr. Mostert calls these “intractable problems, things that cannot be solved by just subdividing them into boxes.” Essentially, they are systemic problems.

To fix this problem, we begin by meeting in the current actuality. We figure out exactly what the issues that we are confronting, and, instead of dissecting them into subcategories, we view them on a macroscopic scale. At this point, we can start to perceive the multiple systems at work in our learning process, and, by way of this understanding, we can break through to a methodology that is ultimately more fruitful. Dr. Mostert breaks the process down into four distinct systems: the leader, the organization, the facilitator (teacher), and the content. Basically, like ingredients for a cake, each of these systems must combine together in just the right way to create meaningful leadership development. By viewing them each as systems, we take into account their respective histories, the different books that they’ve read, and all of the other experiences that make each system unique.

Then, going beyond that, we understand that each of these systems is constantly changing, constantly evolving as it incorporates new knowledge and experiences. Dr. Mostert clarifies, “systemic leadership learning is really thinking of leadership development as a system that is continuously going through an evolution that helps leaders to migrate to a more preferred future state of that system in a way that appreciates the interconnectedness of the various systems involved.” The leader’s themselves are viewed as organic, changing beings that are working to tackle organic, changing, interconnected problems Because of this, we focus not on the memorization of facts or even being able to define key concepts, but rather figuring out how to connect multitudes of systems. We engage in an open dialogue, put our heads together, and connect the dots between the financial aspect, the human resources aspect, and the strategy aspect of our problems. The human brain is naturally inclined the make connections, even in unlikely places, so we want to focus on cultivating a skill for drawing out these networks. Leaders shouldn’t care about how well we could perform on an exam, but rather focus on how we can achieve a more desirable future state for our organizations.

Now comes the hard part. We need to throw out our standard conventions of categorization, bin our lesson plans, and say goodbye to the structures that make us feel safe and comfortable. We need to take a leap, to risk the spontaneous, to believe in the power of emergent learning. This means that neither the facilitator nor the leader has a preconceived notion of the knowledge that they are in pursuit of; instead, they chase it together by combining their respective systems of thought. The leader is free to speak openly about their issues as well as tangents that are related to them, and it then becomes the facilitators job to help them make those connections.

The facilitator can ask questions, make observations, or simply even listen. The important thing, however, is that they are not lecturing about some framework or premeditated proposition. Neither the facilitator nor the student knows what’s going to happen, what they’re going to learn, and this is the excitement of emergent learning. It is the simple power of critical dialogue in action.

Now, this may be a break in tradition from the status quo of leadership development practices, but this way of approaching learning stems from an ancient tradition: the Socratic dialogue. Thousands of years ago in Greece, Plato recorded the dialogues of Socrates, a philosopher who used emergent learning to help others find truth for themselves. Rather than lecture like the sophists of his day, he persistently questioned the people who he talked to help them figure it out for themselves. Not only do people learn more in this way, but they also develop a faculty for figuring out things on their own.

Systemic leadership learning brings this same technique into the modern age and applies it to leaders facing some of the world’s most challenging problems.

I’d love to hear your thoughts on this subject, so please comment below, or in our platform! And, if you have any questions, if you’re feeling inspired, or if you want help using systemic thinking to improve your organization, reach out to me at https://www.jennifercampbell.com.

Many solutions to leading change are one piece of the puzzle…here’s the whole puzzle. Download your own copy of my framework. 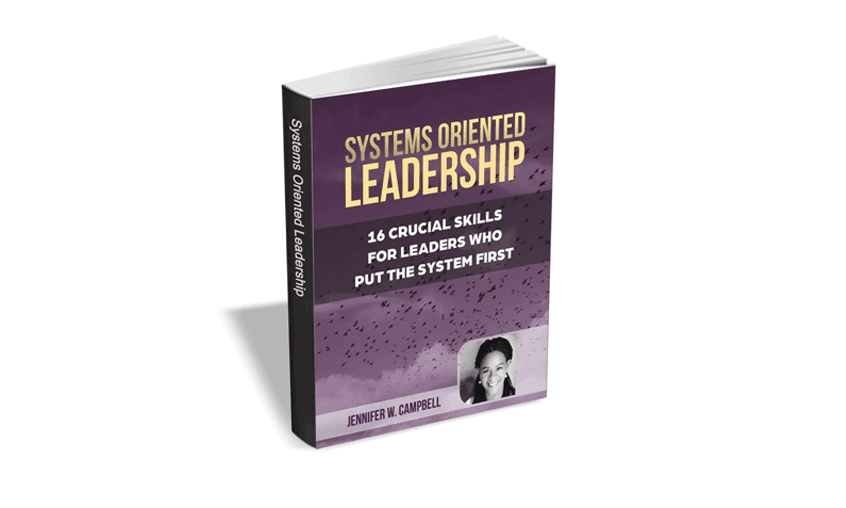 Traditional leadership is no longer working…here’s what to do instead. Download your own copy of my ebook.